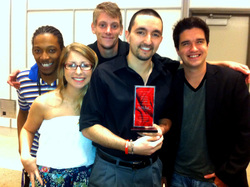 David Murphy, co-president and director of strategic planning and integration for the national advertising firm Barrie D'Rozario Murphy, said the students' creation of "Dr. Nissan" to prescribe innovation for consumers was "funny," "cool" and "hip," and that the SFA team "owned the room from the minute they started their presentation."

Judge Luciana Gomez of Dieste called SFA's creative work "gutsy" and "edgy." Lynnae Hornbarger, who serves on AAF's Reno Board of Directors, said SFA gave an impressive presentation that made effective use of humor.