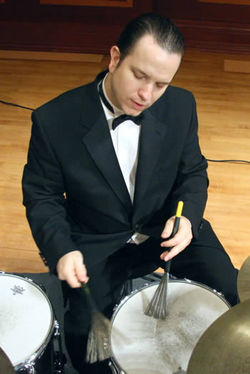 NACOGDOCHES, TEXAS - The music of Leonard Bernstein and Bela Bartók will be spotlighted in "West Side Story to Bartók," a concert presented by the Stephen F. Austin State University School of Music at 7:30 p.m. Friday, Oct. 19, in Cole Concert Hall on the SFA campus.

Guest percussionist Marcus Reddick will join pianists John and Jean Roberts and percussionist Brad Meyers, SFA College of Music faculty members, in the performance, which is a feature of the Cole Performing Arts Series.

Reddick is director of percussion studies in the Townsend School of Music at Mercer University in Macon, Ga., where he teaches applied percussion, percussion ensemble, percussion techniques and courses in music theory, orchestration, musicianship and jazz appreciation as well as assisting with the Mercer Wind and Jazz Ensembles. He has toured extensively and performed around the world as a solo artist, a chamber musician and as a member of numerous ensembles.

Compositions featured on the program include Bartók's "Sonata for Two Pianos and Percussion" and Bernstein's "Symphonic Dances" from "West Side Story."

"The Bartok sonata is a major work for two pianists and two percussionists," he added. "We are pleased to be able to present this performance with our special guest percussionist, Marcus Reddick."

The arrangement of Bernstein's ever-popular "West Side Story" is a medley of some of the top selections from the Broadway musical, such as "Somewhere," "Cha-Cha," "Cool," "Maria" and "Mambo."

Reddick will perform both the Bartok and the Bernstein pieces with John and Jean Roberts, while Meyer will provide a second percussion part for the Bartok sonata.