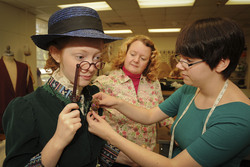 NACOGDOCHES, TEXAS - Audiences will be captivated at what happens on stage when the Stephen F. Austin State University School of Theatre presents "The Madwoman of Chaillot" at 7:30 p.m. Tuesday through Saturday, Nov. 13 through 17, in W.M. Turner Auditorium.

"The Madwoman of Chaillot" is set in the present, but the culture and lifestyle of 1940s Paris is incorporated into the production in a unique blending of yesterday and today to tell the tale of a motley band of "vagabonds" - the titular "Madwoman" and her friends - who attempt to thwart a plot by greedy industrialists and insensitive bureaucrats in Nazi-occupied France, according to Rick Jones, SFA professor of theatre and the play's director.

But equally fascinating and impressive as the on-stage acting is what goes on behind the scenes of this SFA production of the play written by French dramatist Jean Giraudoux and adapted by Maurice Valency.

The work of dramaturgs

The time period in which the play was written, the life of Giraudoux, and unfamiliar terms or phrases the playwright used were important for the actors, stage crew and directors to fully comprehend. Also important was for everyone involved to understand the differences in Valency's adaptation in English and Giraudoux's intent with the original dialogue in the script, according to Jones.

Enter the dramaturgs, or "the two Emilys," as Jones calls them - Emily Gibson and Emily Robbins.

Emily Gibson, a senior theatre major from Mesquite, started preparing for her duties as dramaturg for "The Madwoman of Chaillot" last summer. Gibson prepared a packet for the actors to study that included information about the play, the playwright and what certain terms and phrases meant.

"I suppose the most challenging aspect is trying to figure out why Giraudoux used certain names for characters within the play," Gibson said, "and if he based these characters off of anyone specifically. As a researcher, sometimes you have to deal with the fact that there may always be some questions left unanswered."

Emily Robbins is a Pasadena junior majoring in French. Her work as a dramaturg for "The Madwoman of Chaillot" was her first experience with a stage production, and she described her new insight into theatre and specifically this role as "a great experience.
"
"The play will be performed in English," she said, "but we wanted to stay as true to the French original as possible. We went through it line by line."

Valency's adaptation of Giraudoux's play is different from the original script, Jones explained.

For example, Jones said, one female character, a waitress, appears to be much more innocent sexually in the English adaptation than in Giraudoux's original script.

"So what we want to do is to find a way to suggest what Giraudoux had in mind," Jones said. "That kind of work has been invaluable."

Robbins said she hopes that the work she has done in the weeks leading up to Tuesday's opening night and the performances that follow will give the audience "a sense of the culture, the French style and the humor."

The play incorporates a lot of actors - 28 playing 40 characters -necessitating many props and costumes.

Tory Fields, senior theatre major from Rowlett, is associate costume designer for the production. She's working with Angela Bacarisse, professor of theatre and costume designer, to create the wardrobes of the many characters.

Although most of the characters will be wearing modern costumes, there is the suggestion of the aura - a quaintness and charm - of the time period when the play was originally written and produced in the early 1940s.

"The 'good guys' are three madwomen and a rag picker, a street singer, a juggler - a sort of collection of vagabonds," Jones said. "We want to play up the eccentricities of these characters without making them seem too cartoonish. That's sort of a fine line."

Sugar Land senior Chloe Westfall serves as properties master, and she found it challenging to find all the typical items associated with a French café, the scene of the first act, and all the beloved collections of Countess Aurelia, the lead Madwoman character, that makes her cellar, the scene of the second act, a homey and unique storage space that can double as "a cozy living room," Westfall said.

"There is everything that comes with a café … dishes, table settings, drinks coming on and off," she said.

And after years of living in the same Parisian apartment, the countess has accumulated many strange collections, Westfall said.

"She's an interesting woman, so she has some oddball things," she said. "The biggest challenge is finding these things that seem to be of high quality, because she's certainly not a poor woman."

Blending the past and the present

"It's really a combination of three time periods," Westfall said of the production's visual style, "because it's set in the present and filtered through the 1940s, but the Madwoman has her head in the 19th century. That's her romantic view of the world, and the things she loves, come from that."

The script says that the play is "set next spring," which, when written, would have been in 1943. But when Giraudoux set that time frame, "he was also talking about a futuristic document at some level," Jones said

"So we tried to combine those two ideas," Jones said, "… to try to make it forward looking, and at the same time, have a flavor of the same future that he was looking at.

"We're trying to negotiate those boundaries a little," he said. "We're paying attention to the fact that we are in the present, but there is a negotiation between the past and the present that I find fascinating."