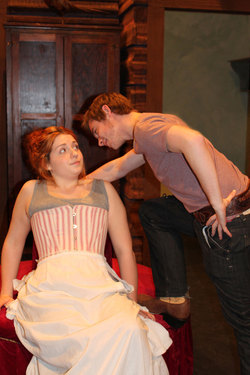 British exchange students Gloria Rowe and David Mowbray, who portray Kate Hardcastle and Charles Marlow, Jr., in the SFA School of Theatre's upcoming production of "She Stoops to Conquer," rehearse a courting scene. The show opens at 7:30 p.m. Tuesday, March 1, and continues through Saturday, March 5, in W.M. Turner Auditorium.

The entire cast of Stephen F. Austin State University's upcoming production of "She Stoops to Conquer" has spent the last five weeks developing their characters, but four of the actors have faced some unique challenges while preparing for the March 1 through March 5 performances in W.M. Turner Auditorium.

George Boullin, David Mowbray, Gloria Rowe and Igraine Scott are all British theatre students who are spending a year studying at SFA as part of the American Theatre Arts program offered at Rose Bruford College in London. Their being cast in one of the classics of the English stage would seemingly give "the Brits" an advantage over the other actors when it comes to delivering lines. However, director Alan Nielsen has transported the play's setting to East Texas during the 1870s.

Consequently, the four students are drawing on the Texas accents they've heard since August to develop their characters' speech patterns.

Scott, who portrays Little Annie, the piano player in the bar, said SFA Assistant Professor Joe Alberti has also helped them with the accents by having them visualize where the sounds are coming and how their mouths need to be shaped in order to produce the sounds.

Rowe, who plays the principal role of Kate Hardcastle, has to use two separate Texas dialects. The entire plot revolves around the genteel, upper class Kate pretending to be a barmaid in an effort to get close to her would-be suitor, Charles Marlow, who is more comfortable speaking to lower class women than to those of his own social status.

For both portrayals Rowe said she's had to slow down her speech considerably, draw out the words, and utilize completely different vowel sounds than she's accustomed to. Her accent and mannerisms for the genteel Kate, however, are more subtle than the ones she uses for the barmaid.

Mowbray, who plays Kate's love interest, said their onstage romance has also posed some challenges to the two of them.

"The love scenes were terribly awkward at first because our relationship in real life is like brother and sister," Mowbray explained. "We had to rehearse and rehearse the minute details of hand placement and tilting of our heads until they became more natural for us."

Boullin, who plays Marlow's friend, George Hastings, said despite the challenges, they're all having a good time. "The play 'feels' very British, with its screwball, Shakespeare comedy of errors type of plot."

The students all agreed that the adaptation works well and will be enjoyable for the local audience since the script now includes so many references to Texas.

"Dr. Nielsen had to explain some of the jokes to us, but the audience will catch them," Boullin said.

The play will be presented at 7:30 p.m. Tuesday, March 1, through Saturday, March 5, in W.M. Turner Auditorium. Prior to the opening performance, Nielsen and Dr. Elizabeth Tasker, assistant professor of English, will give a brief talk at 7 p.m. in Griffith Gallery, located across the hall from Turner Auditorium. They will speak about Goldsmith's original play and Nielsen's adaptation.

The audience is invited back to the gallery after Tuesday's performance for a reception honoring the event's corporate sponsor, Tipton Ford-Lincoln, and to meet the cast.