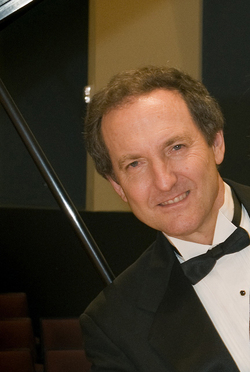 "The sonata is an important compositional genre for the keyboard," said Roberts, "and performing examples of sonata form from three centuries allows the listener to compare the use of the genre by different composers."

Roberts will also play Charles Ives' "First Sonata," which explores many early 20th century compositional techniques, using familiar hymns such as "Bringing in the Sheaves" and "What a Friend We Have in Jesus," explained Roberts.

Fred J. Allen, SFA director of bands, will narrate each movement of Ives' work, using actual notes from the manuscript as well as other sources written by the composer.

Prior to accepting the director position for the SFA School of Music in 2009, Roberts was the artist-in-residence and head of music at the Western Australian Conservatorium of Music of the Edith Cowan University. He has also served on the faculties at Furman University, South Carolina, the University of North Carolina at Charlotte and was the inaugural dean of the Townsend School of Music at Mercer University in Macon, Ga.

The recital is a joint presentation of the SFA College of Fine Arts and School of Music and is a part of the 2011-2012 Cole Performing Arts Series. Cole Concert Hall is located in the Tom and Peggy Wright Music Building, 2210 Alumni Dr.