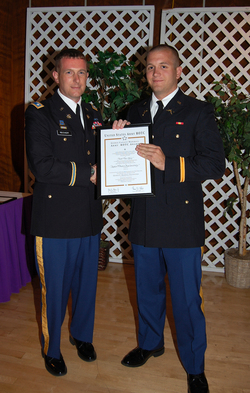 The award recognizes a select number of students from a national pool as outstanding Army Reserve Officers' Training Corps cadets of the year based on integrity, leadership, scholarship, duty and physical conditioning.

"Joining the Army is something I have wanted to do since high school," said Kelly, commander of SFA's Lumberjack Battalion. "This is a job that I love and that I'm good at."

Kelly, a graduate of Douglass High School, was selected from the SFA Army ROTC program to represent the university among 273 other cadets from across the country.

"We are honored to select Cadet Jacob Kelly as our representative to attend this important seminar," said Lt. Col. Todd Reichert, SFA military science professor. "Through his hard work and dedication to our organization, he has proven himself to be an outstanding leader with unlimited potential."

Since 1977, the Marshall Foundation, in affiliation with the U.S. Army, has brought nearly 9,500 college seniors to the foundation to receive the Marshall Award and participate in the seminar.

"It was an honor to meet with the secretary of the Army and several three-and four-star generals," Kelly said. "This was a big deal for me to receive this award, and I'm very excited and thankful."

"Cadet Kelly represents the quality of men and women who volunteer to serve our country as Army officers and will make a tremendous impact on our national security," Reichert said.

Kelly says he will receive armored training at Fort Benning, Ga., from September through February. Armored troops are responsible for all of the tank and cavalry reconnaissance operations on the battlefield.

Kelly and eight other graduating cadets will be commissioned as second lieutenants in the U.S. Army Friday at SFA. One Navy ensign also will be commissioned during the ceremony, which will be held at 5 p.m. in the Twilight Ballroom of the Baker Pattillo Student Center.