SFA presents Texan adaptation of 'She Stoops to Conquer' 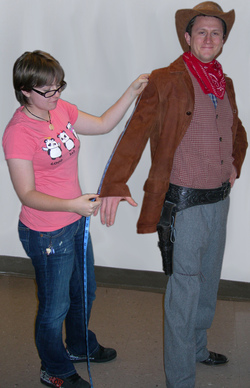 NACOGDOCHES, TEXAS - "If you like comedy, old Western movies, a love story, or just a good time, you'll enjoy this show," said director Alan Nielsen about the upcoming production of "She Stoops to Conquer." The Stephen F. Austin State University School of Theatre will present Oliver Goldsmith's classic comedy of misunderstandings at 7:30 p.m. Tuesday, March 1, through Saturday, March 5, in W.M. Turner Auditorium.

Goldsmith's play, which opened in 1773, is set in England, but Professor Nielsen has transported the action to the 1870s in Texas, somewhere between Dallas and Nacogdoches.

The basic plot, however, remains the same. When Kate Hardcastle learns her would-be suitor, Charles Marlow, is more comfortable around servant girls than ladies of social status such as herself, she tricks him into thinking she is of lower class in order to win his heart.

In Nielsen's adaptation, the Hardcastle mansion is now a ranch house, the English pub where Marlow first meets Kate's stepbrother is now a saloon, and the geographical locations mentioned are now places in and around Texas.

While 80 percent of the dialogue remains the same, the actors use Texas accents, and Nielsen has added colloquial expressions true to his setting.

The original play is already stylized and almost melodramatic, Nielsen explained. "By setting it in 19th century Texas, we've made the play more accessible to our audience. We're also able to have fun with the clichés of old Western movies, including standard characters such as the old coot and the charming rascal.

"She Stoops to Conquer" will be Nielsen's last SFA directing credit prior to his retirement in May.

"I've always wanted to do this play," said Nielsen, who joined the SFA faculty in 1990. "The adaptation brings together a lot of my interests: film, history, comedy, style and a bit of puppetry."

The play is a joint presentation of the SFA College of Fine Arts, School of Theatre and University Series. It is sponsored in part by Tipton Ford-Lincoln.