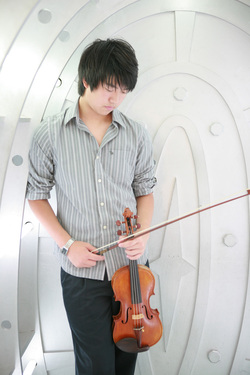 Violinist Kevin Lin, junior division winner of the 2011 Schmidbauer International Young Artist Competition, will be the featured soloist during the Orchestra of the Pines concert at 7:30 p.m. Saturday, Oct. 15, in Cole Concert Hall.

Stephen F. Austin State University's flagship orchestral ensemble, The Orchestra of the Pines, will open it 2011-2012 season with "By Popular Demand" at 7:30 p.m. Saturday, Oct. 15, in Cole Concert Hall on the SFA campus.

Featured performer will be violinist Kevin Lin, who will be performing the first movement of Pyotr Tchaikovsky's "Violin Concerto in D major, Op. 35."

"Deemed unplayable by his peers when he finished writing the work in 1877, Tchikovsky's violin concerto has become and remains one of the most popular works in the violin repertoire," said Gene H. Moon, SFA director of orchestral studies and the orchestra's director.

"After captivating the audience and winning the junior division of the 2011 Schmidbauer International Young Artist Competition, Lin was invited to perform the Tchaikovsky with the Orchestra of the Pines," Moon continued.

"The top prize in the junior division does not include an engagement with the orchestra, but Kevin's virtuosity and musicianship were at such a high level that we have invited him back 'by popular demand.'"

The program also includes Nathaniel Stookey's "The Composer is Dead," a musical work based on the book of the same title by Lemony Snicket, in which a detective, searching for the culprit who murdered the composer, accuses orchestral instruments one by one, only to be rebuked by each with a worthy alibi.

"'The Composer Is Dead' has become the contemporary to familiar long-standing works such as Prokofiev's 'Peter and the Wolf' and Britten's 'Young Person's Guide to the Orchestra,'" Moon said.

Ron Anderson, SFA professor of voice and interim chair of the Department of Psychology, will narrate Stookey's work.

The concert is a joint presentation of the SFA College of Fine Arts, School of Music and the Orchestra Series. It is sponsored in part by Nacogdoches Memorial Hospital and the Wedgeworth-Wright Foundation for the Arts.