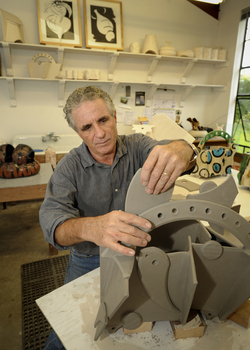 SFA Professor of Ceramics Piero Fenci was recently named the 2012 Texas Master by the Houston Center for Contemporary Craft. He is pictured here working in his studio.

NACOGDOCHES, TEXAS - Piero Fenci, professor of ceramics at Stephen F. Austin State University, has been named the 2012 Texas Master by the Houston Center for Contemporary Craft, an honor bestowed upon only three other Texas artists.

"This award not only acknowledges an artist's exceptional body of work, but also recognizes his or her dedication to the Texas craft community," said Anna Walker, curator of the HCCC. "Piero was chosen for his innovative approach to ceramics along with his strong commitment to teaching and promoting his field both in Texas and abroad."

"This was a total surprise," said Fenci. "I feel so humbled and lucky to have received this recognition."

As a result of the award, Fenci will have a solo show at the HCCC that will open on Friday, June 1, 2012, and run through Sunday, Sept. 9, 2012. He will also serve as one of three jurors for "CraftTexas 2014," an exhibition for which Walker anticipates over 600 submissions.

Fenci joined the SFA faculty in 1975 after receiving his Master of Fine arts from the New York College of Ceramics at Alfred University and a Bachelor of Arts in Latin American Studies from Yale University.

During his 36-year tenure at SFA, Fenci has built the ceramics area from what a former teaching colleague has called a "back porch operation" with one kiln to a 6,00 square-foot facility equipped with 14 kilns. SFA's ceramics program is recognized as one of the best in the nation for a university of its size.

Fenci's academic leadership has also extended to Mexico. What began as a one-month guest lectureship at the Universidad Autonoma de Chihuahua in 2004 eventually led to Fenci's spearheading the founding of a ceramics program at that institution.

The program, which is the first in contemporary ceramic art in northern Mexico, is now flourishing. It is headed by Adan Saenz, one of the Chihuahuan students who followed Fenci back to SFA to earn his Master of Fine Arts, and has just been given a large, renovated space with state-of-the-art equipment.

Fenci continues to mentor the program by annually serving as a visiting professor.

Additionally, Museo Casa Chihuahua, the state museum of Chihuahua, invited Fenci to present a solo exhibition there in 2010, the first ever for a United States citizen.

His art, which explores the sculptural and conceptual realm of contemporary ceramics, has roots in the underlying craft tradition of functionality. He draws inspiration and ideas from objects ranging from Etruscan pottery, pre-Columbian architecture, Japanese armor of the Muromachi period, Shaker hatboxes and tinware, and traditional origami.

"Intimate scale, the history of use, the tactile qualities of touching and lifting, and, above all, the interaction of surface and form are central concerns in my work," the ceramicist said.

Fenci's vessels have been featured in numerous magazines and books, have been exhibited in solo and group shows from coast to coast, and are included in many private and museum collections, including The Museum of Fine Arts, Houston, and the Schein-Joseph International Museum of Ceramic Art in Alfred, N.Y.

His work is currently a part of a group show at Ro2 Art in Dallas that will run through Sunday, July 17. Other artists in the show are Fenci's wife Elizabeth Akamatsu and Michael Francis.