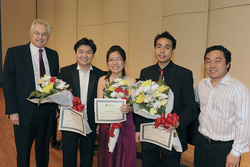 NACOGDOCHES, TEXAS - The Stephen F. Austin State University School of Music has announced the winners of the 2011 Schmidbauer International Young Artist Strings Competition held Jan. 22 through 23 on the university campus. From the pool of international applicants, ten semi-finalists in both the Senior Division (ages 19 to 27) and Junior Division (ages 15 to 18) were selected to compete in the two-day event.

Violinist Ying Fu, a doctoral student at the Shepherd School of Music of Rice University, was awarded the $5,000 first prize in the Senior Division. The native of China will receive an additional $2,500 when he returns to SFA next year to perform Violin Concerto in D minor, Op. 47 by Jean Sibelius with the Orchestra of the Pines.

Violinist Xiaoxiao Qiang, a Chinese native pursuing her master's at Rice University, received the second prize of $3,000. Violist Born Lau, a native of Hong Kong studying at the Colburn Conservatory of Music in Los Angeles, received the $2,000 third prize.

In the Junior Division, violinist Kevin Lin of New Jersey won the $1,500 first prize; violinist Kelly Talim, who was born in Japan, won the $1,000 second prize; and violinist Jalusha Kapoor of Arizona won the $750 third prize.

The Schmidbauer competition is made possible by the generosity of George and Peggy Schmidbauer. The competition alternates annually between piano and strings.