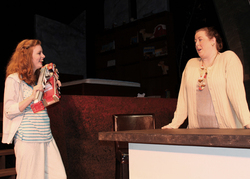 Missouri City junior Amelia Fultz, portrays Izzy in the SFA School of Theatre's production of "Rabbit Hole," rehearses a comic scene with White Oak senior Lindsay Love, who plays Izzy's mother. David Lindsay-Abaire's drama, which director Scott Shattuck calls "an astounding affirmation of the importance and resiliency of family," depicts an extended family learning to adjust after the accidental death of a child. It is being presented nightly at 7:30 p.m. through Saturday, Oct. 8, in W.M. Turner Auditorium.

NACOGDOCHES, TEXAS - "I think the audience will love the journey we will take them on," said Lancaster senior Lamar Jefferson when speaking of the Pulitzer Prize-winning play, "Rabbit Hole." The Stephen F. Austin State University School of Theatre's production opens tonight, Tuesday, Oct. 4, and will be presented at 7:30 p.m. each evening through Saturday, Oct. 8, in W.M. Turner Auditorium.

Jefferson and Wink senior Erin Whitmire portray Howie and Becca, a young couple whose 4-year-old son was killed in an accident eight months prior to the opening scene.

"People will be able to relate to (the storyline) probably on a very personal level," said Whitmire. "It's just like life. There's grief, and love, and comedy, and hope-and it's all believable."

Amelia Fultz, Missouri City junior who portrays Becca's sister, Izzy, expanded upon the play's realisim. "Most dramas tend to be a little overdone and unrealistic, but Lindsay-Abaire's writing is natural and fuss-free. The scenes are realistic, as if the audience walked in on a real family sitting around and talking."

Even though the characters are dealing with a loss, there is a good balance of pain and humor, remarked Jefferson.

In fact, White Oak senior Lindsay Love says the purpose of her character (Becca's mother, Nat) is to provide comic relief and comfort.

"The scenes between Izzy and Nat are hilarious," said Fultz. "I'm able to break out of my shell for this role as the 'screw-up sister' who has a habit of breaking the tension in the room."

Nick Pinelli, a freshman from The Woodlands who is making his SFA acting debut with "Rabbit Hole," is impressed with the development each of the characters goes through during the play. "The audience is given just enough information about each character and then watches them grow."

Professor Scott Shattuck, director of the SFA School of Theatre and of the play, invites the community to see the production. "The subject matter may not sound like much fun, but please trust us on this one. It's moving, uplifting, and actually quite funny."

In conjunction with the play's five performances, the School of Theatre is presenting "Survived By . . . ," a symposium on the experience of grief. Before or after each performance, an expert on grief will speak from either an academic, medical or spiritual perspective. All talks will be given in W.M. Turner Auditorium and are free. Please go to www.theatre.sfasu.edu for a detailed schedule of speakers and their topics.

"Rabbit Hole," which is recommended for mature audiences, is a joint presentation of the SFA College of Fine Arts and School of Theatre. It is sponsored in part by Tipton Ford-Lincoln.