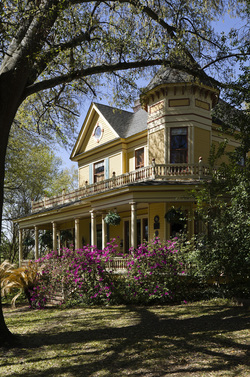 This photograph of the Emma and Robert Lindsay Home on Virginia Avenue is one of many photographs SFA Associate Professor Christopher Talbot has taken of Nacogdoches buildings designed by architect Diedrich Rulfs. The photographs are showcased in the exhibition, "The Legacy of Diedrich Rulfs: Architect of Nacogdoches," which will open at 6 p.m. Thursday, Nov. 3, at The Cole Art Center @ The Old Opera House.

NACOGDOCHES, TEXAS - The Stephen F. Austin State University College of Fine Arts and School of Art will open "The Legacy of Diedrich Rulfs: Architect of Nacogdoches" with a 6 p.m. reception Thursday, Nov. 3, at The Cole Art Center @ the Old Opera House in downtown Nacogdoches.

The exhibition of photographs by Christopher Talbot, interim director of the SFA School of Art, highlights the visual legacy of German-born architect Diedrich Rulfs, who immigrated to Nacogdoches in 1880.

Over 100 of his Nacogdoches architectural creations, designed between 1880 and the mid-1920s, are still standing, including The Cole Art Center where the exhibition is being held, and many of the town's turn-of-the-century homes.

"Diedrich Rulfs has had a profound impact on our community. Everywhere you look in Nacogdoches, you can see his influence," said Talbot. "This exhibition will allow the viewers to see both the inside and outside view of some of these historic buildings."

The photographs will be used in a forthcoming book on the architect by Dr. Jere Jackson, professor of history who was named an SFA Regents Professor for 1996-1997. "Diedrich Rulfs: Designing Modern Nacogdoches" is being published by the SFA Press and should be available in early 2012.

Talbot said the project gave him an opportunity to use the skills he learned as a commercial architectural photographer in the Washington, D.C., area in the 1990s. "There are some true gems of historic architecture here in Nacogdoches. It has been a pleasure getting access to these homes and businesses."

Talbot will give a brief talk during the opening reception, and Jackson will be present.

The exhibition, which will be displayed in the Jack and Doris Ledbetter Gallery through Saturday, Jan. 14, is sponsored in part by the SFA Friends of the Visual Arts and Nacogdoches Junior Forum.