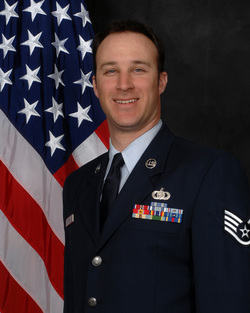 Staff Sgt. Gene Dooley, an SFA alumnus, will be the guest trumpet soloist during a joint concert of the SFA jazz bands, the Swingin' Axes and Swingin' Aces, at 7:30 p.m. Thursday, April 28, in Cole Concert Hall.

NACOGDOCHES, TEXAS - Classics by Stan Kenton and a selection of blues, funk, swing and shuffle will be performed during the joint concert by the Stephen F. Austin State University jazz bands, the Swingin' Axes and Swingin' Aces, at 7:30 p.m. Thursday, April 28, in Cole Concert Hall on the SFA campus.

The Swingin' Aces, directed by SFA Associate Professor of Music Deb Scott, will open the concert with a variety of musical styles. Included on their program are Gordon Goodwin's blues tune, "The Phat Pack" and Willie Maiden's swing tune, "A Little Minor Booze."

The Aces will also present a shuffle piece, "The Cheese that Time Forgot" by Dan Gailey, and Bob Mintzer's funk tune, "Computer."

The Swingin' Axes' second half of the program is "devoted to the great jazz composer, pianist and big band leader Stan Kenton and will feature one of our trumpet alumni, Staff Sgt. Gene Dooley from the U.S. Air Force Band of Mid-America," said SFA Professor of Music Gary Wurtz, the Axes' director.

Among Kenton's works on the program are "Samba de Haps," "Pegasus," "I Can't Get Started" and "Love for Sale."

Dooley studied with Wurtz while pursuing his Bachelor of Fine Arts at SFA. Prior to graduating in 1996, he joined the Air Force Band of the Gulf Coast (Texas Air National Guard, Fort Worth Joint Reserve Base).

In 2009, he was deployed to Kyrgyzstan, Kuwait, Iraq and Afghanistan with the USAFE rock band as musical director, arranger, trumpeter and guitarist, returning to the Band of Mid-America earlier this year.

The concert is a joint presentation of the SFA College of Fine Arts and School of Music. Cole Concert Hall is located in the Wright Music Building, 2210 Alumni Dr.