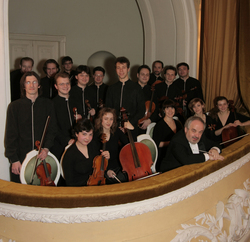 "We are thrilled to present this internationally acclaimed ensemble as part of our 2011-2012 University Series, 'Your Bridge to the Arts,'" Goodall continued.

Of particular interest to East Texans is the program's inclusion of the world premiere of "Denali," the latest work by SFA Professor Stephen Lias.

The piece was inspired by Lias' recent one-week residency in the national park and preserve located between Anchorage and Fairbanks, Ala.

"The events and emotions of my time in Denali are given sound and form in this celebratory piece as it moves through exuberance, grace, danger and grandeur," Lias said.

The concert will be the first time Lias will hear the piece performed live, and he is particularly excited about the Chamber Kremlin Orchestra giving "Denali" its debut. "They are highly gifted technical players and also very musical, so they bring beautiful emotion and virtuosity to everything they play."

The concert will open with Edward Elgar's "Serenade in E minor for String Orchestra, Op. 20," followed by "Chamber Symphony, Op. 110 bis" by Dmitri Shostakovich and J.S. Bach's "Contrapunctus No. 1 from The Art of the Fugue."

The orchestra will close the concert with Antonin Dvorak's "Serenade for Strings."

"It is an honor to have my piece included among such luminary composers," Lias said.

Founded in 1991 by music director Misha Rachlevsky, the Chamber Orchestra Kremlin has performed over 1400 concerts. Almost 600 of these have been in Moscow; the rest on tours in 24 countries of Europe, North and South America and the Far East.

The group has recorded over 30 compact discs, a number of which have received international acclaim and awards. Of the 900 compositions in the orchestra's repertoire, over 20 were written especially for the ensemble by composers from Russia, Europe and the United States.

Prior to the Oct. 20 concert, Lias and Rachlevsky will give a 7 p.m. informative talk in Griffith Gallery, located across the hall from Turner Auditorium. The audience is invited back to the gallery for a post-performance reception to meet the artists and honor the event's corporate sponsor Commercial Bank of Texas.