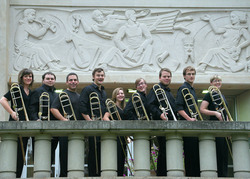 NACOGDOCHES, TEXAS - The Trombone Choir of Stephen F. Austin State University will present a free concert at 7:30 p.m. Monday, July 5, in Cole Concert Hall on the SFA campus. The 10-member choir will perform the 40-minute program they will play at the International Trombone Festival in Austin on July 7.

Deb Scott, SFA associate professor of trombone and the group's leader, said it is a "tremendous honor" to be invited to perform at the festival, which features internationally acclaimed trombonists. SFA's group is one of only two university ensembles scheduled, she continued.

The choir's performance will serve as a warm-up concert for "two of the biggest trombone quartet 'names' in the world, Bones Apart and Viento Sur," Scott explained. Both quartets have performed at SFA within the past four years.

SFA's ensemble normally has 20 student members, but because of the students' varied summer schedules, Scott reduced the group size to ten players and invited three alumni to participate. Current students include Seth Adams of Winnsboro, Kelly Barker of Dayton, Cory Barnes and David Carlsen of Fort Worth, Webb Gardner of Katy and Ashley Scambray of Cypress.

The program will open with "Quartet No. 1" by Meador, who is having international success with his compositions and arrangements, according to Scott.

The group will also present "Rewriteable" by Brian Allen, one of Scott's former students, and Jan Koetsier's "Concerto Grosso," featuring Scott and T. Mensch on alto trombones and Carlsen on tenor trombone.

The program also includes the world premiere of "Sequoia" by SFA professor Stephen Lias. The piece, which is part of Lias' national park series, reflects the majesty of the forest, explained Scott.

The concert will close with Derek Bourgeois' "Osteoblast," which Scott describes as "a highly energetic piece that takes the audience on a fun roller coaster ride. It is also the most difficult trombone choir piece I have every played."