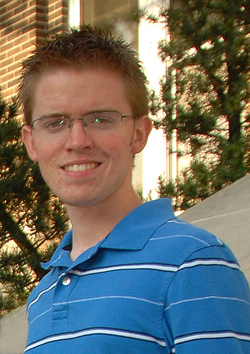 Russell Cannon, junior composition student from Garland, received the Texas Student Composer Award at a recent conference of the Texas Chapter of the National Association of Composers/USA.

NACOGDOCHES, TEXAS - For the third consecutive year, a composition student from Stephen F. Austin State University has taken top honors at the annual meeting of the Texas Chapter of the National Association of Composers/USA.

Lufkin native Adan Kent Ramsey won the award in 2008 and 2009. This year, the graduate student's "Pensieve" for viola and piano received an Honorable Mention.

In addition to these honors, both students were elected to the Board of the Texas Chapter of NACUSA. As the student coordinator, Ramsey will concentrate on increasing membership among the state's college students, and Cannon, who was elected to the at-large position, will reach out to members and potential members through social networking sites.

Dr. Stephen Lias, SFA professor of composition, was elected vice president of the Texas Chapter. He already serves as the chairman of the National Board of Directors for the larger association.

"SFA is currently getting a great deal of representation in NACUSA at both the state and national level," Lias said.

Almost 20 people from SFA, including presenters, composers, and student and faculty performers, attended the 2010 state conference at which scholars gave presentations and each entered composition was performed in a recital setting.

Chris Schoppe, graduate student from Gatesville gave a poster presentation, and the following composers had their pieces performed:

"I can say without reservation that this was the finest, most professional, and most talented group of musicians we have taken to such an event," Lias said. The performers brought exceptional musicianship and commitment to the pieces they played, and the composers' pieces were extremely varied, demonstrating to all the breadth and depth of our program."