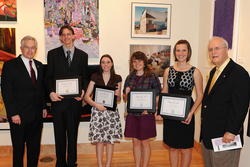 The Dean's Awards not only recognize the recipients for what they have already accomplished, but inspire them to reach deep from within to aspire to a level of excellence that they may not even be sure that they are capable of, but are nevertheless motivated to try for-and to establish themselves as role models for their peers," Himes continued.

The awards were established by the Dean's Circle, an auxiliary group of community members founded in 2008 and "dedicated, in part, to nurturing potential young artists within the College of Fine Arts," Himes said.

Brown, who received the Ed and Gwen Cole Dean's Award in Art, is working towards her Bachelor of Fine Arts with a concentration in advertising design and photography. Internationally-acclaimed artists have chosen her work for "Texas National 2008" and SFA's 2009 "Art Alliance Show." This year, one of her photographs was selected for the exchange show in Chihuahua, Mexico, and her poster design was chosen for the SFA opera, "Susannah."

She has shared her talent by teaching high school students drawing and design during SFA's past two Art Days and working as a photographer at Pine Coves Camp.

Hambrick, who received the Jack and Doris Ledbetter Award in Music, plays the horn in the Wind Ensemble and Orchestra of the Pines, and the mellophone in the Lumberjack Marching Band. She is also a member of the Roarin' Buzz Saws Basketball Pep Band, a student woodwind quintet and student horn quartet.

She has served as a counselor at the SFA Band Camp, tutored music history in SFA's Academic Assistance Resource Center, and volunteered for the Schmidbauer Competition and the UIL Marching and Solo/Ensemble Contests.

Dixon, who received the Dr. Robert G. Sidnell Memorial Dean's Award in Music Education, plans to pursue a master's degree after graduating from SFA in December. While at SFA, she has been involved in the A Cappella Choir and the opera program and has been a member of the SFA School of Honors.

Dixon's love of performance has led to her participation in the Paris Community Theatre and her appearance as Ado Annie in Lamp-Lite Theatre's production of "Oklahoma!" She is also a member of the First United Methodist Church Choir.

Tucker, who received the George and Peggy Schmidbauer Dean's Award in Theatre, is pursuing his Bachelor of Fine Arts with a stage management emphasis. While at SFA, he has stage managed "A Raisin in the Sun," "The Ugly Duckling," "Schoolhouse Rock Live! Too," "Defacing Michael Jackson" and "Line." He also recently served as the company manager for SFA's "Festival of New American Plays."

He is an elected member of the Student Productions Advisory Committee, is the treasurer of the honorary theatre society and works in the SFA Fine Arts Box Office. This summer he will intern in audience services at the Texas Shakespeare Festival.

During the awards ceremony at The Cole Art Center @ The Old Opera House, the recipients were introduced by their major professors, awarded $2,000 to be applied towards next year's school expenses and given an opportunity to speak.

"It was an inspirational evening for all present," said Himes. "The Dean's Circle thanks all members, the Advisory Board and especially the donors for making these awards possible."