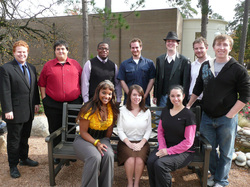 NACOGDOCHES, TEXAS - Ten Stephen F. Austin State University vocal students were named as finalists at the recent regional conference of the National Association of Teachers of Singing held in Lubbock.

Ten other SFA students advanced to the semi-final rounds in the competition that included over 500 students from Texas, Oklahoma and New Mexico.

"SFA certainly made its mark at this competition," said Dalton. "Our students' success is a reflection of our entire vocal program."