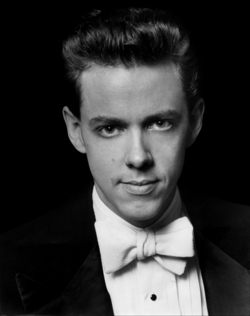 Pianist Ron Petti, SFA director of accompanying, will join Fowler in presenting songs by Beethoven and Paolo Tosti and Richard Hundly's setting of poems by Jams Purdy. The duo will also perform a song from the musical "Floyd Collins" and the tenor aria from Gaetano Donizetti's opera "Daughter of the Regiment."

"This aria, famous for its nine high Cs, was a favorite of Luciano Pavarotti," Fowler said. "It has been a signature aria and role throughout my career. Tonio was my debut role in Germany as well as Montreal in the '90s. It is a great joy to return to it now."

A member of the SFA faculty since 2006, Fowler has sung with La Scala, the Paris Opera, Salzburg Festival, Lyric Opera of Chicago, and New York City Opera. In addition, he has performed in Carnegie Hall, Tanglewood, and theaters of Berlin, Barcelona, Rome, Montreal, Vienna and Brussels.

He received international attention as winner of the Plácido Domingo Operalia Competition and has collaborated with world-famous artists such as Riccardo Chailly, Renée Fleming, Jessye Norman, Sherrill Milnes, Marc Minkowski and Vladimir Chernov.

Fowler's recital repertoire encompasses nine languages, and he has had recent performances in Paris, Lyon, Switzerland and Belgium.

The recital is a joint presentation of the SFA College of Fine Arts and School of Music.