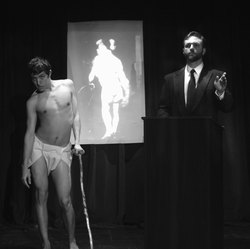 NACOGDOCHES, TEXAS - The SFA College of Fine Arts and School of Theatre will present Bernard Pomerance's "The Elephant Man" at 7:30 p.m. Tuesday, Feb. 24, through Saturday, Feb. 28, in W.M. Turner Auditorium as part of the University Series.

The drama is based on the true story of the deformed John (Joseph) Merrick, commonly referred to as "the Elephant Man," and Dr. Frederick Treves' attempt to integrate him into Victorian London society.

"It is a touching drama that explores human isolation," said director Allen Oster, SFA professor of theatre. "Pomerance's skill in story telling garnered him the 1979 Tony Award for Best Play and the Drama Desk Award for Outstanding New Play.

Although Proteus syndrome caused the real Merrick to have massive skin overgrowths, atypical bone development and tumors, no prosthetics or special makeup will be applied to the actor portraying him. Instead, El Campo junior David Hathway will convey Merrick's affliction through contorted body positioning.

"David is doing a superb job with his portrayal of Merrick," said Oster. "We are grateful for the physiological expertise local chiropractor Gary McClinton and physician Aaron Polk Jr. gave him as he prepared for the role."

The play is recommended for mature audiences.

Prior to the opening night performance on Tuesday, Feb. 24, Oster and SFA theatre students will present an informative talk at 7 p.m. in Griffith Gallery, across the hall from Turner Auditorium. The audience is invited back to the gallery after the play for a reception honoring the play's corporate sponsor, Tipton Ford-Lincoln-Mercury, and to meet the cast.

Turner Auditorium is located in the Griffith Fine Arts Building, 2222 Alumni Dr. on the SFA campus.