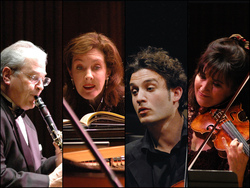 NACOGDOCHES, TEXAS - As a part of its 2009-2010 University Series, the Stephen F. Austin State University College of Fine Arts will present the Chamber Music Society of Lincoln Center at 7:30 p.m. Thursday, Oct. 22, in W.M. Turner Auditorium on the SFA campus.

A highlight of the program will be the performance of Olivier Messiaen's "Quartet for the End of Time," a piece composed for and performed by prisoners in a World War II German prisoner-of war camp.

"This will be a rare opportunity to hear a live performance of one of the most important musical works of the 20th century," said Dr. Christopher Ayer, SFA associate professor of clarinet.

The performers are only four of the expert chamber musicians who comprise the Chamber Music Society of Lincoln Center. Through its performance, education and recording/broadcast activities, the society draws more people to chamber music than any other organization of its kind.

Kavafian has been an artist of the Chamber Music Society since 1979 and has played more concerts with it than any other artist. She is on the faculties of both Yale and Stony Brook Universities and enjoys a prolific career as a soloist, recitalist and chamber musician, performing with virtually all of America's leading orchestras. She has appeared at the White House on three separate occasions and has been featured on many network and Public Broadcasting Service television specials.

Shifrin became a member of the Chamber Music Society in 1989 and served as its artistic director from 1992 to 2004. Currently a professor of music at Yale University, the clarinetist is in constant demand as an orchestral soloist, recitalist and chamber musician. He has received three Grammy nominations, and his recording of the Mozart Clarinet Concerto with the Mostly Mozart Festival Orchestra was named Record of the Year by Stereo Review.

As a member of the Chamber Music Society since 1995, McDermott performs and tours extensively with the group each season. She regularly collaborates with violinist Nadja Salerno-Sonnenberg; the renowned piano quartet, Opus One; and with her sisters as the McDermott Trio. The pianist performs at festivals across the United States and has been named the artistic director of The Ocean Reef Chamber Music Festival and the Avila Chamber Music Celebration in Curacao.

Prior to the performance, Ayer will give a brief lecture about the program at 7 p.m. in Griffith Gallery, across the hall from Turner Auditorium. The audience is invited to return to the gallery after the performance for a reception honoring the artists and the event's corporate sponsor, Point A Media.