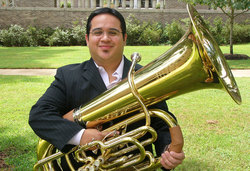 "Steve's piece features the tuba's lyrical abilities along with its wide dynamic contrast," explained Salas. "Garry's shows off the tuba's gregarious nature in the low register and incorporates some of the extended technique that has become common in some 20th century music such as multi-phonics (singing and playing simultaneously) and tongue slaps."

The third commissioned work is a new sonata for tuba and piano by Austin-based composer Kenneth Friedrichs that captures all of the tuba's musical abilities in a four-movement work, Salas continued.

James Pitts, SFA accompanist, will join Salas in performing the music by Lias and Friedrichs.

A native of Alamo, in the Rio Grande Valley, Salas received his Bachelor of Music degree in tuba performance from Baylor University. He earned his Master of Music degree from the University of Kentucky in Lexington and is completing his Doctor of Musical Arts from the same institution.

Prior to his appointment at SFA in 2006, Salas was the artist/instructor of tuba and euphonium at Mahidol University in Bangkok, Thailand, where he served as the country's first full-time tuba-euphonium professor. He has also taught at Transylvania University in Lexington, Ky. and Marshall University in Huntington, W.V.

The recital is a joint presentation of the SFA College of Fine Arts and School of Music. The Cole Concert Hall is located in the Tom and Peggy Wright Music Building, 2210 Alumni Dr.