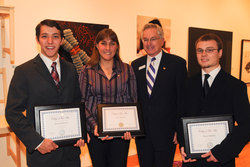 Three students from the SFA College of Fine Arts recently received the inaugural Dean's Awards from Dr. A.C. Buddy Himes, dean of the college. Pictured with Himes, from left, are David Hathway, El Campo theatre major; Amy Bennett, Alief music education major; and Shaun Roberts, Lufkin art major. The students were selected by the faculty on the basis of their potential to further develop their artistic and academic abilities.

"The Dean's Awards not only recognize the recipients for what they have already accomplished, but inspire them to reach deep from within to aspire for a level of excellence that they may not even be sure that they are capable of, but are nevertheless motivated to try for-and to establish themselves as role models for their peers," Himes continued.

The awards were established by the Dean's Circle, an auxiliary group of community members founded in 2008 and "dedicated to honoring worthy practitioners and students engaged in teaching or performance of the arts in the Nacogdoches community," Himes said.

Roberts, who received the Ed and Gwen Cole Dean's Award in Art, is working towards his Bachelor of Fine Arts. His talent has been recognized by internationally-acclaimed artists who juried the 2007 and 2008 spring Art Alliance exhibitions and named his work as "Best in Show."

He has shared his talent by instructing high school students during the School of Art's annual Art Day for the past three years and instructing area children during the summer Art Academy in 2008. He has also assisted with the instruction in SFA's Drawing II and Life Drawing classes.

Bennett, who received the Jack and Doris Ledbetter Dean's Award in Music, plays the oboe in the SFA Wind Ensemble, Orchestra of the Pines and Symphony Orchestra. She is also a member of the Lumberjack Marching Band.

In addition to her involvement at SFA, Bennett is an active musician in the Houston area where she is a member of the Houston Symphonic Band. She spends her summers traveling the country as a marching member of the Bluecoats Drum and Bugle Corp.

David Hathway, who received the George and Peggy Schmidbauer Dean's Award in Theatre, is pursuing a Bachelor of Fine Arts with performance emphasis. He played the title roles in SFA's productions of "The Elephant Man" and "Big River: The Adventures of Huckleberry Finn" and also appeared in "Lend Me a Tenor" and the 2008 "Festival of New American Plays."

Hathway is a two-year member of the Original Cast, the School of Theatre's musical cabaret troupe, and served as an audience service intern for the Texas Shakespeare Festival last summer.

Himes said over 100 people attended the awards ceremony at The Cole Art Center @ The Old Opera House during which the recipients were introduced by their major professors, awarded $2,000 to be applied towards next year's school expenses, and then given an opportunity to speak.

"There was a huge wave of positive emotions: pride, confidence, optimism-a strong sense of recognition for achievement, and a stronger sense of challenge and inspiration for the future," Himes said. "The Dean's Circle thanks all members, the Advisory Board and especially the donors for making these awards possible."