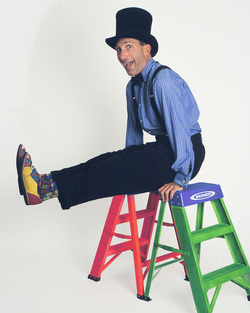 Garry Krinsky will open the 2009-2010 season of the Stephen F. Austin State University Chidren's Performing Arts Series with his "Toying with Science" show. Season and single event tickets are now on sale.

"We've got an excellent mix of performances this year which appeal to a wide range of ages," said Diane Flynn, series director. "All shows will again be at 9:30 a.m. and 12:30 p.m."

The season will open Tuesday, Oct. 27, with "Garry Krinsky: Toying with Science."

"Kindergartners through high school seniors can all learn from Garry as he uses circus skills, daring feats of balance, mime and original music to explore gravity, leverage, fulcrums and simple machines," Flynn said.

On Monday, Nov. 23, ArtsPower will present "Laura Ingalls Wilder," a musical inspired by Wilder's classic narratives that celebrate the pioneering spirit and America's heartland. It is targeted for grades one through six.

Theatreworks USA's "Nate the Great" on Wednesday, Jan. 27, is a new musical about teamwork and friendship for kindergartners through fourth graders.

"It stars Marjorie Weinman's beloved detective who uses all of his derring-do to locate his friend Annie's missing painting," Flynn explained.

On Wednesday, April 21, American Family Theater, Inc. will present a musical version of Han Christian Andersen's "The Little Mermaid." Targeted for children in kindergarten through sixth grade, the story follows Mera, the Little Mermaid, who rescues Prince Edmond from the sea and then sacrifices her beautiful singing voice for the chance to win his love.

The season will close on Tuesday, May 11, with Theatreworks USA's "Freedom Train."

"This inspirational musical about Harriet Tubman and the Underground Railroad incorporates dance, dialogue and period music to tell the thrilling story of self-sacrifice, dedication and survival to third through ninth graders," Flynn said.

Each year, more than 9,000 area school children attend the daytime shows presented in W.M. Turner Auditorium on the SFA campus, with most shows selling out early in the season.

"We just completed our brochure mailing to area school teachers and have already taken some large orders," said Flynn. "We seat customers according to the date we receive payment or a purchase order, so I encourage patrons to call early in the year."

Tickets to any performance on the series are $6 for individuals and $5 each for groups of 20 or more. Season tickets are $24 each.