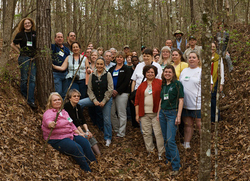 Jeffery Williams, landscape geographer and GIS systems administrator for SFA's Arthur Temple College of Forestry and Agriculture, will outline his ongoing research on the historic trace and the new mapping efforts to identify trail resources. The lectures are planned as follows:

The series of lectures is part of the Camino Real Heritage Education Project funded by the Intermountain Region of the National Park Service. The second of two workshops for heritage resource professionals will be held this summer, as well, followed by a workshop exclusively for teachers.

El Camino Real de los Tejas National Historic Trail was added to the National Trails System in 2004. It crosses Texas into northwest Louisiana and is a portion of the historic trail that linked Mexico City with the Spanish colonial capital at Los Adaes, near Robeline, La. The Stone Fort Museum has been actively involved in education and interpretation of the trail for more than a decade, beginning in 1996 with the award-winning exhibit, Traversing the Wilderness: El Camino Real in Eastern Texas.

To learn more about the public lectures, summer workshops or the museum's current exhibit, "Building a Community and the Meaning of Leadership," visit the Web site at www.sfasu.edu/stonefort or contact museum director Carolyn Spears at (936) 468-2408.

The Stone Fort Museum's regular hours are 9 a.m. to 5 p.m. Tuesday through Saturday and 1 to 5 p.m. Sunday.