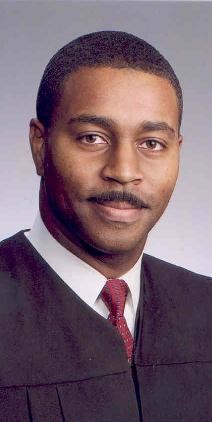 Texas Supreme Court Justice Dale Wainwright, who made history in 2002 as the first non-incumbent black justice to be elected to the court, will speak at 10 a.m. Monday, Sept. 8, in Cole Concert Hall at Stephen F. Austin State University.

Since that historic election, Wainwright has been recognized for his integrity, scholarship and dedication to the rule of law. U.S. Sen. Kay Bailey Hutchison has described him as an "outstanding star on the Supreme Court in Texas," and the Dallas Morning News has applauded his "scholarly fairness." The 2007 Houston Bar Association Judicial Evaluation Poll rated Wainwright one of the most outstanding members of the Texas Supreme Court.

"We are very pleased that Justice Wainwright is including a stop on the SFA campus in his upcoming visit to East Texas," said George Franks, an instructor of criminal justice and public administration at SFA. "This is a terrific opportunity for SFA students and faculty, as well members of the community, to hear directly from a Texas Supreme Court Justice. Justice Wainwright serves as an outstanding role model for our students."

Wainwright became a jurist in 1999 when then Gov. George W. Bush appointed him to the 334th District Court in Harris County. Prior to his appointment to the bench, he practiced law at major firms handling complex trials and appeals. The justice also has a long history of public service, having co-founded the Aspiring Youth Program, a national program to assist at-risk youth. He has also served on the board of directors of the Houston Volunteer Lawyers Program.

Wainwright is expected to speak until about 10:30 a.m. Monday, and then he will entertain questions from the audience. Franks said the SFA Department of Government is planning to host similar speaking events on campus in upcoming semesters.