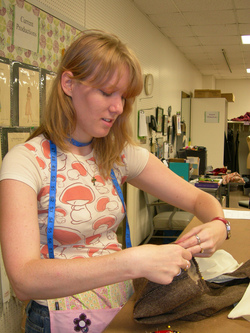 Julie Glover, Houston senior, works on a pair of knickers to be worn in the SFA School of Theatre's production of Neil Simon's "Brighton Beach Memoirs" which opens at 7:30 p.m. Tuesday, Sept. 30, and runs through Saturday, Oct. 4, in W.M. Turner Auditorium.

Winner of the New York Drama Critics' Circle Prize for Best Play and three Tony Awards, the comedy is the first in Simon's semi-autobiographical "Eugene Trilogy." It focuses on a struggling Jewish family in 1937 Brighton Beach, Brooklyn, and in particular, on 15-year-old Eugene Jerome as he come to terms with girls, his family and his dreams of becoming either a famous writer or playing for the New York Yankees.

Much of the play's humor lies in our ability to relate to Eugene's adolescence. We laugh at his inherent awkwardness and his attempt to find his place in the world," said Kyle Kennedy, SFA assistant professor of theatre and the play's director.

Other members of the household are Kate's widowed sister, Blanche, portrayed by San Antonio senior Jessica Moore; and her daughters, Laurie and Nora, played respectively by Frisco sophomore Erin Morris and Fort Worth senior Faye Austin.

A real strength of the script is its wide appeal, Kennedy said. "You don't have to be Jewish, or have lived in Brighton Beach in the 1930s to relate to the characters, their financial struggles, or the clashes within their extended family. Ultimately, the play is a touching comic drama about the importance of family and what it is to draw on each other's strengths."

The play is a joint presentation of the SFA College of Fine Arts and School of Theatre. It is sponsored in part by Tipton Ford-Lincoln-Mercury of Nacogdoches and is recommended for mature audiences.

W.M. Turner Auditorium is located at 2222 Alumni Dr. on the SFA campus.