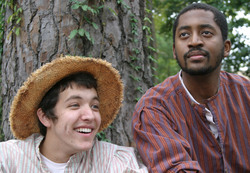 NACOGDOCHES, TEXAS - Stephen F. Austin State University's upcoming production of "Big River: The Adventures of Huckleberry Finn" Nov. 18 through 22 will bring 21st century technology to the 1985 award-winning musical that is based on Mark Twain's classic novel.

The familiar story set in the 1840s takes Huckleberry Finn and Jim, a runaway slave, down the Mississippi River on a raft through several locations, depicted on stage by minimal set pieces.

"For this production, we are also utilizing projected images to set the changing atmospheres and locales and state-of-the-art moving lights to create water effects and a lightning storm," said Mart senior Weston Wetzel, lighting and projections designer.

"The modern technology enhances the dream-like quality inherent in a musical, and provides a visual counterpart to Roger Miller's songs," Wetzel added.

Director Scott Shattuck, director of SFA's School of Theatre, emphasized that the musical closely follows the themes of Twain's original novel. And while the overall tone is humorous, Twain's attack on racism does come through.

"Miller wrote some songs in the novelty style for which he is best known," Shattuck said, "but there are also moving ballads about friendship and nature, and some of the most powerful gospel music I've ever heard."

The musical is a joint production of the SFA School of Theatre and School of Music. David Hathway, junior theatre major from El Campo, is cast as Huck Finn, and Waldron Archer, sophomore theatre major from Round Rock, portrays Jim. Thirty other SFA students and theatre professor Alan Nielsen round out the cast.

An additional 75 or so faculty and students and nine community musicians under the direction of David Howard, SFA assistant professor of music, are also involved in the production that Shattuck describes as "the biggest and most complex that I've attempted in 25 years as a director." "This has definitely been a group effort," Shattuck continued.

The curtain will rise at 7:30 p.m. in W.M. Turner Auditorium Tuesday, Nov. 18, through Saturday, Nov. 22. Prior to Tuesday's performance, Steven Marsden and Kenneth Untiedt, SFA assistant professors of English, will share information about Twain and his famous novel at 7 p.m. in Griffith Gallery. The audience is invited back to the gallery after Tuesday's performance for a reception honoring the show's corporate sponsor, Tipton Ford-Lincoln-Mercury.