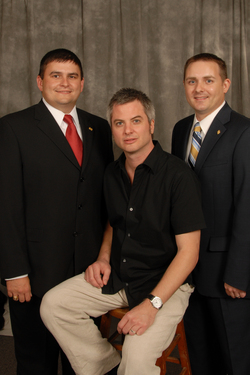 The Office of Development at Stephen F. Austin State University has been restructured to include a fundraising team of three new employees who will focus solely on securing major gifts for the university.

The team is made up of prospect research analyst Greg Garcia and major gift officers Craig Turnage and Trey Turner. All three started work at SFA on Monday.

"We are thrilled to have the opportunity to welcome the university's first major gift fundraising team," said Dr. John Lewis, interim vice president for development. "With a researcher and two major gift officers, we will be better able to identify and qualify individuals and organizations desiring to support the university and its programs with a major gift commitment."

"I cherish my memories from the time I spent at SFA, and I am very much looking forward to giving back to the institution, which helped me so much," said Turnage, a Nacogdoches native and former director of enrollment management at Tyler Junior College. "I am also very excited about supporting the Office of Development's efforts to raise needed funds for programs and services that benefit the students and faculty."

Turner, who also hails from Nacogdoches, echoed that sentiment, saying is he eager to put his education and experience to work for his alma mater.

"Much of the success I have attained in my career is attributable to the solid education and training I received at SFA," said Turner, who previously worked in pharmaceutical sales. "I'm grateful for the chance to give back to SFA, and I'm excited to know that my efforts will have a direct impact on the future of the university."

Garcia, the Office of Development's new researcher, earned two Bachelor of Arts degrees from the University of Houston in 2006, one in political science and one in history. He was most recently employed as library supervisor at his alma mater.

"Some of the most successful people I know graduated from SFA, including my wife and several other family members," said Garcia, who grew up in Houston. "I have great respect for the university, and I am very excited to have the opportunity to help this team raise funds that will benefit SFA students for years to come."